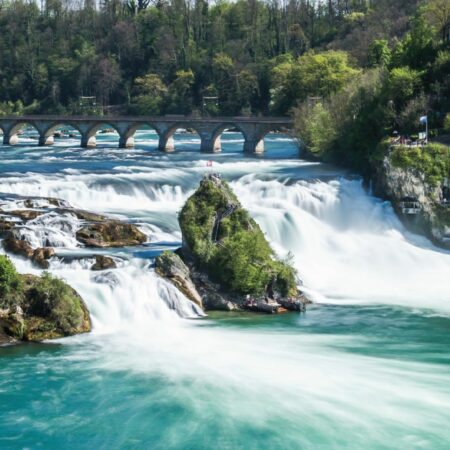 Limestone rocks divide the Rhine Falls into the Zurich Falls, the Schaffhausen Falls and the so-called Mühle Falls. The middle rock forms the border between the two cantons of Zurich (left bank) and Schaffhausen. The Rhine Falls is among the waterfalls that change least due to erosion.

As early as the 11th century, a small mill was operated on the right side of the Rhine Falls. Later, grinding workshops and forges were added. Since the beginning of the 19th century, there have been two dams in the Rhine above the falls, which supplied the water wheels of the ironworks and the mill with the required water via canal inlets.
Iron ore had been smelted at the Rhine Falls since the 16th century at the latest. Towards the end of the 18th century, the operation of the blast furnace was abandoned. In 1810 Johann Georg Neher acquired the ironworks and developed it into the first important industrial ironworks on the Rhine Falls.
In 1853, the Schweizerische Wagen Fabrik (later called SIG) was founded. One of the decisive factors for the founding of the company was the use of water power.
Also for the use of water power, the Aluminium-Industrie-Aktien-Gesellschaft Neuhausen was founded in 1888 with the aim of extracting aluminium. In 1945, aluminium production was shut down.

At the end of the 19th/beginning of the 20th century in particular, ideas were put forward for the technical use of the waterfall. Projects such as making the Rhine navigable throughout or ideas for harnessing hydroelectric power had little chance.
Even today, the water power at the Rhine Falls is used for energy generation. At 4.4 MW, the output of the Neuhausen Rhine power plant is rather modest compared to the largest hydroelectric power plant on the High Rhine with 120 MW.
The connection of the Rhine Falls region to the railway network led to an upswing in the Rhine Falls hotel industry in the second half of the 19th century. In 1862, the Hotel Bellevue was built opposite the Baden railway station, followed by the Hotel Weber in 1844 and the Hotel Schweizerhof in 1861. Guests could promenade undisturbed to the Rhine Falls through various parks. Already at the turn of the century, the Neuhaus hotel industry began to decline. The reasons are thought to be the emergence of tourist centres in the Swiss mountain cantons, the development of Neuhausen into an industrial town and a change in travel behaviour. 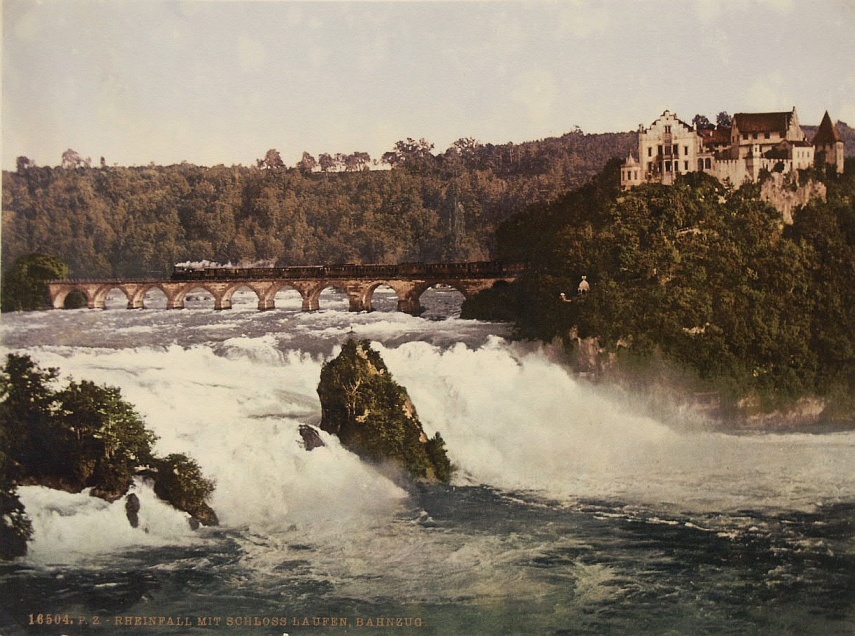 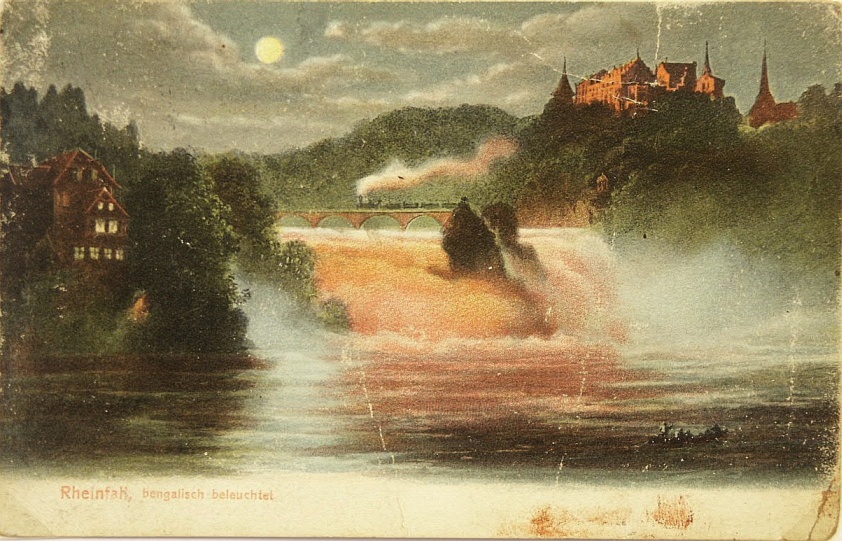 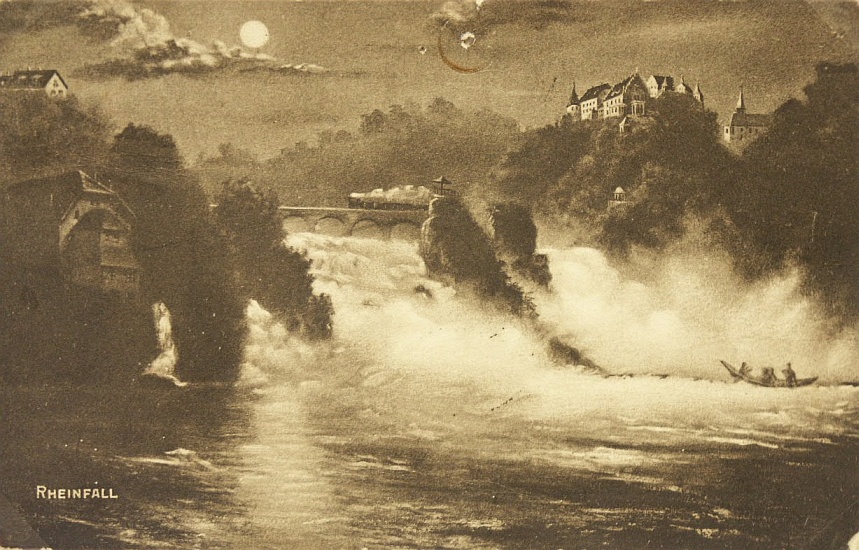 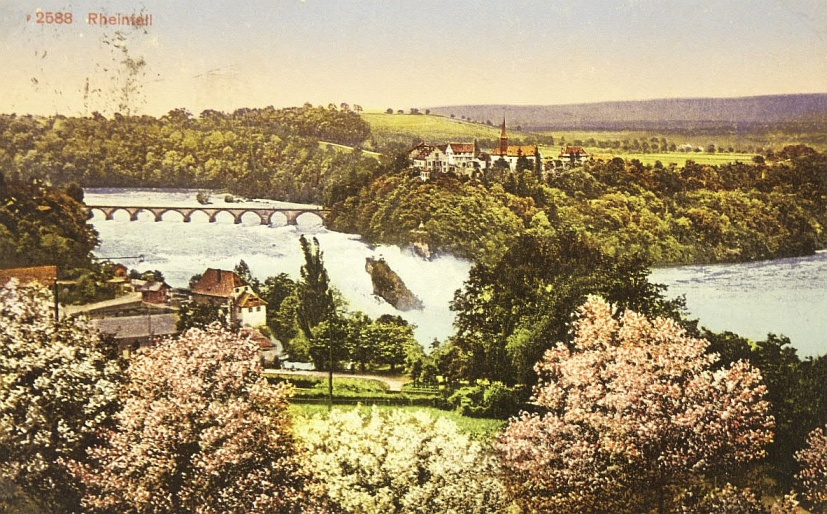 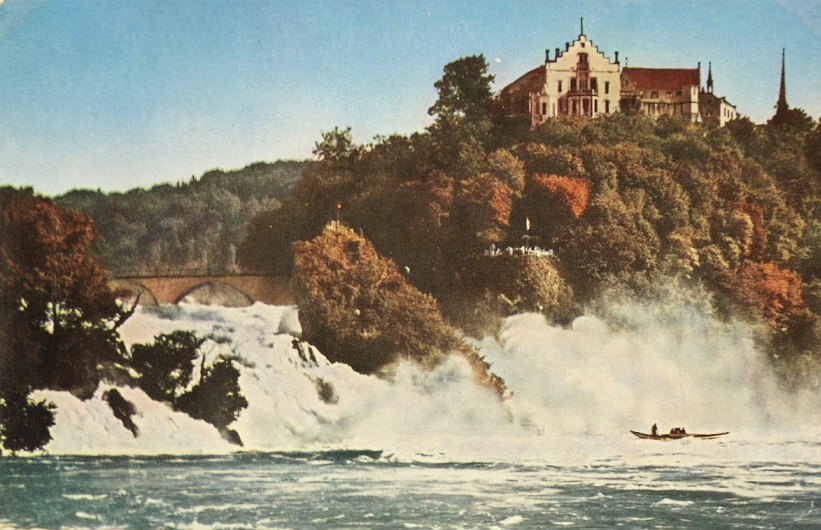 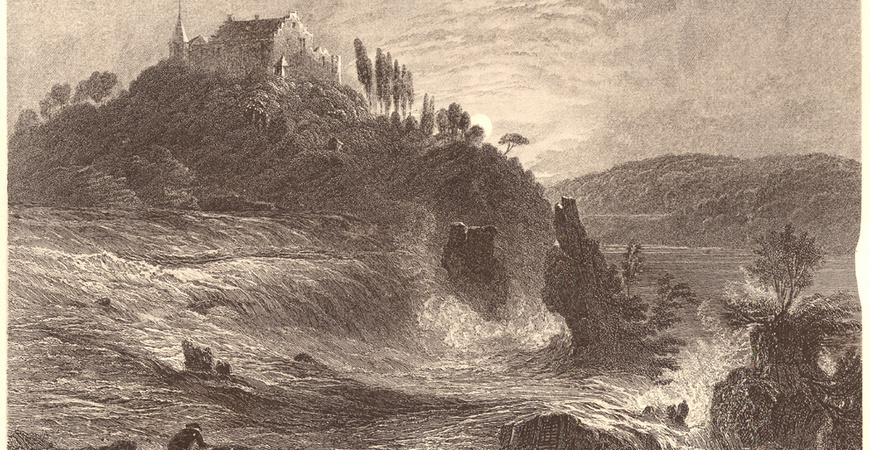 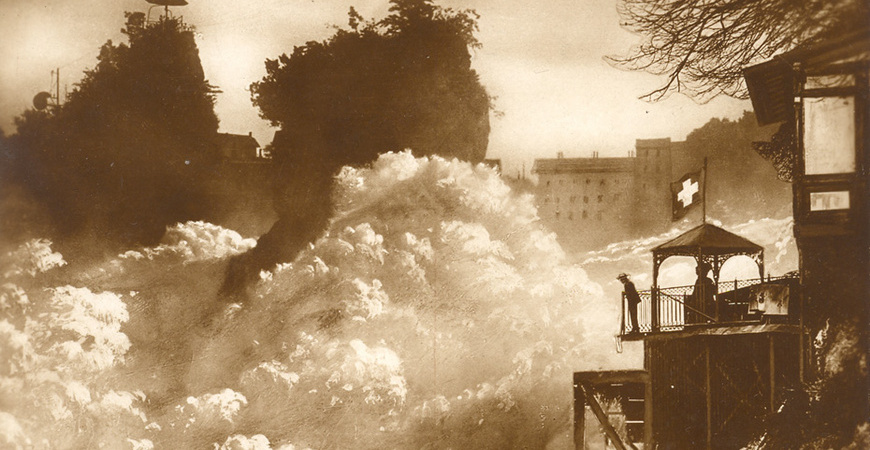 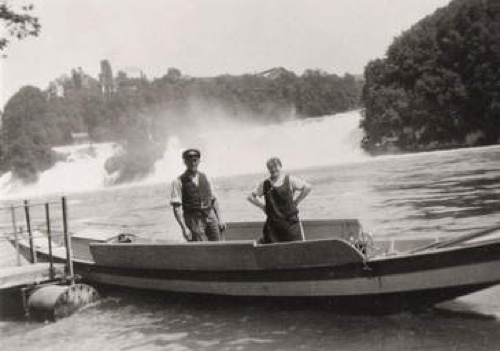 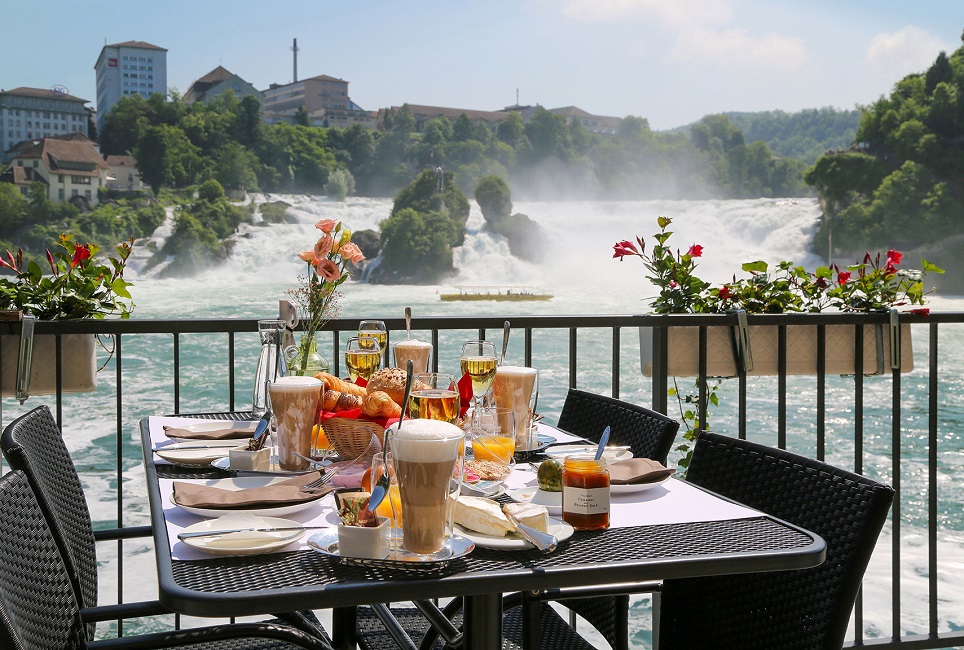 On the first floor of the “Grande Dame” in the Rhine Falls basin, at the Schlössli Wörth. Capture the Rhine Falls in all its glory. On the majestic veranda, you experience the spectacular view of the largest waterfall in Europe while enjoying our inviting breakfast. 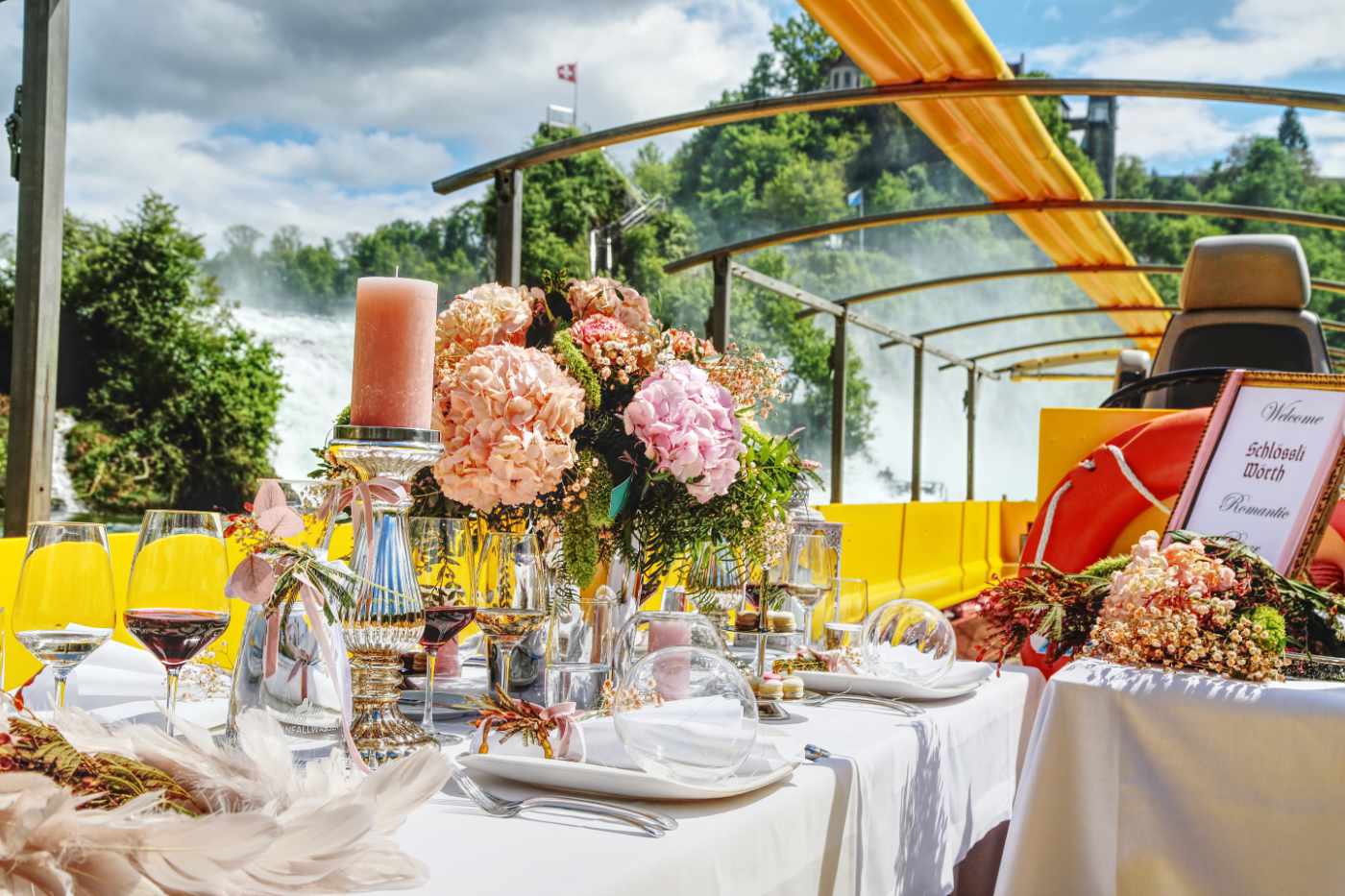 You’ve never experienced anything like that before. We will bring you and your companion exclusively onto the boat anchored in the Rhine Falls basin. Our “water taxi” will take you there and bring you back afterwards. 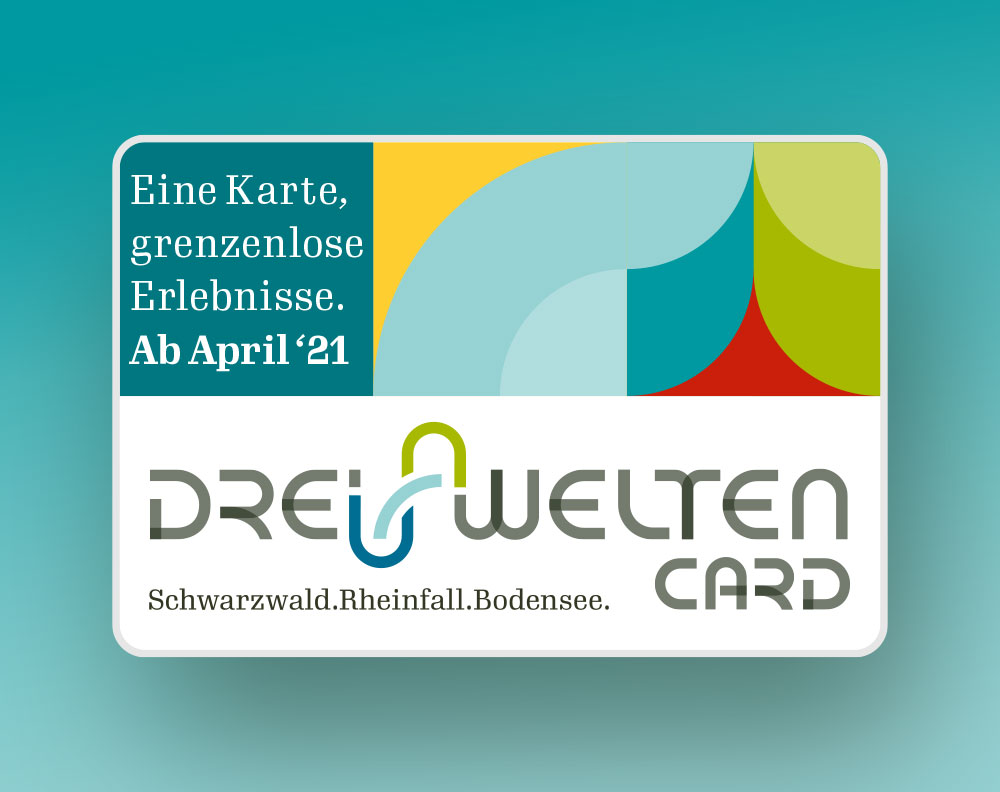 As a DreiWelten Card holder, you can benefit from a free boat ride on the “Rock Tour Yellow Line No. 1” when you present your card at the ticket counter. 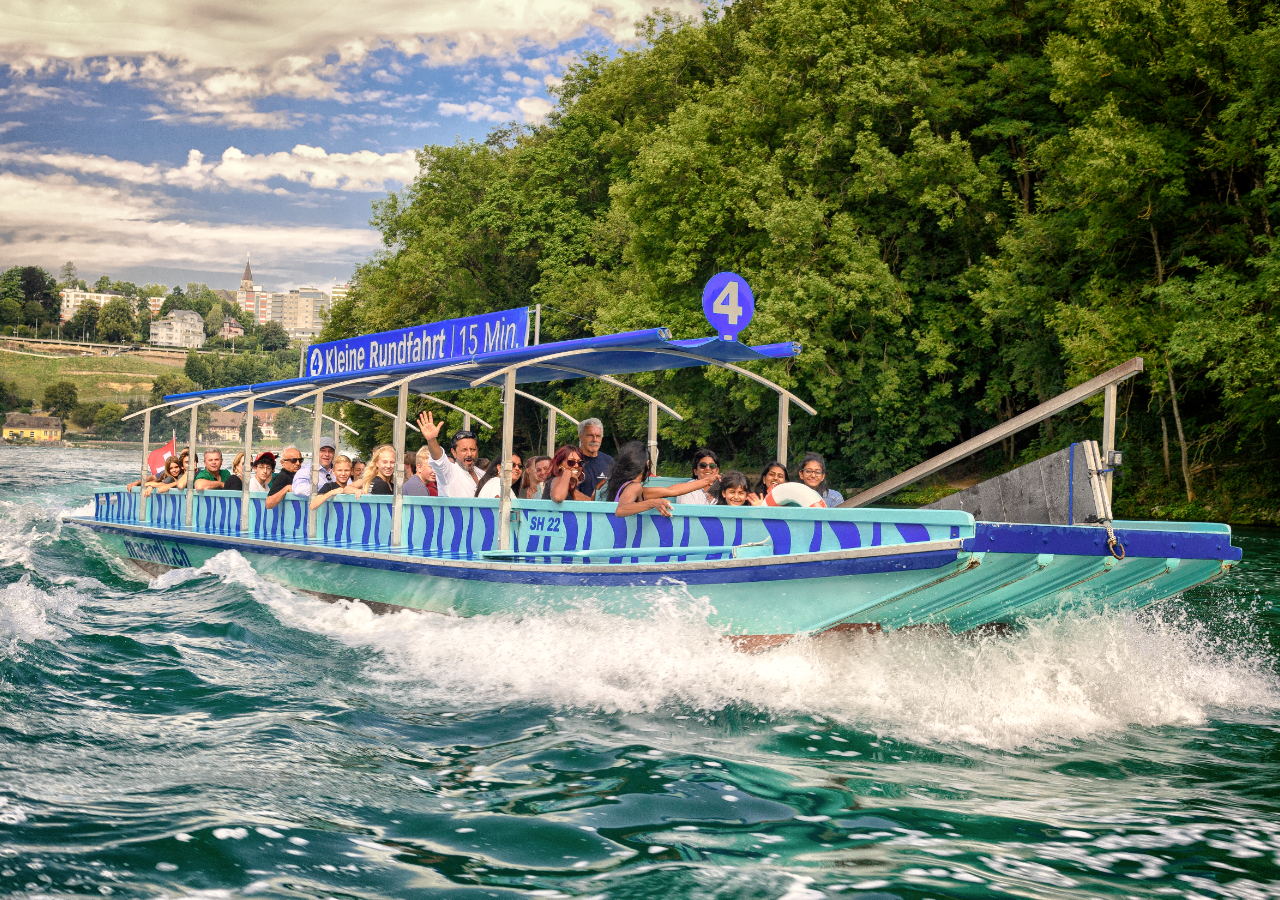 The Short Tour No. 4 Blue Line is the boat tour for everyone. Take the opportunity to experience the thundering waters of Europe’s largest waterfall up close. 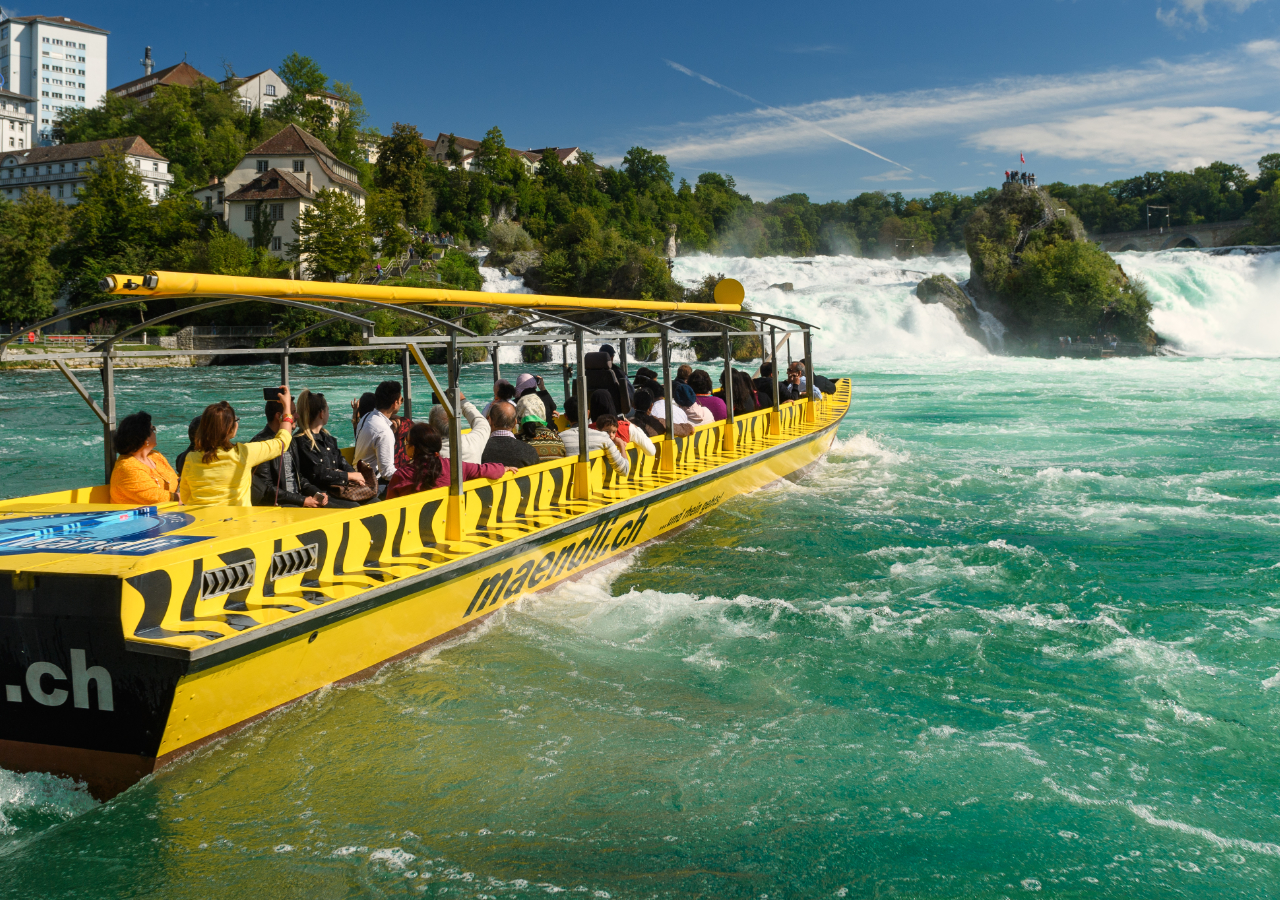 The Rock Tour No. 1 Yellow Line is our highlight at the Rhine Falls in Schaffhausen. Take the opportunity to experience the largest waterfall in Europe in a unique way. 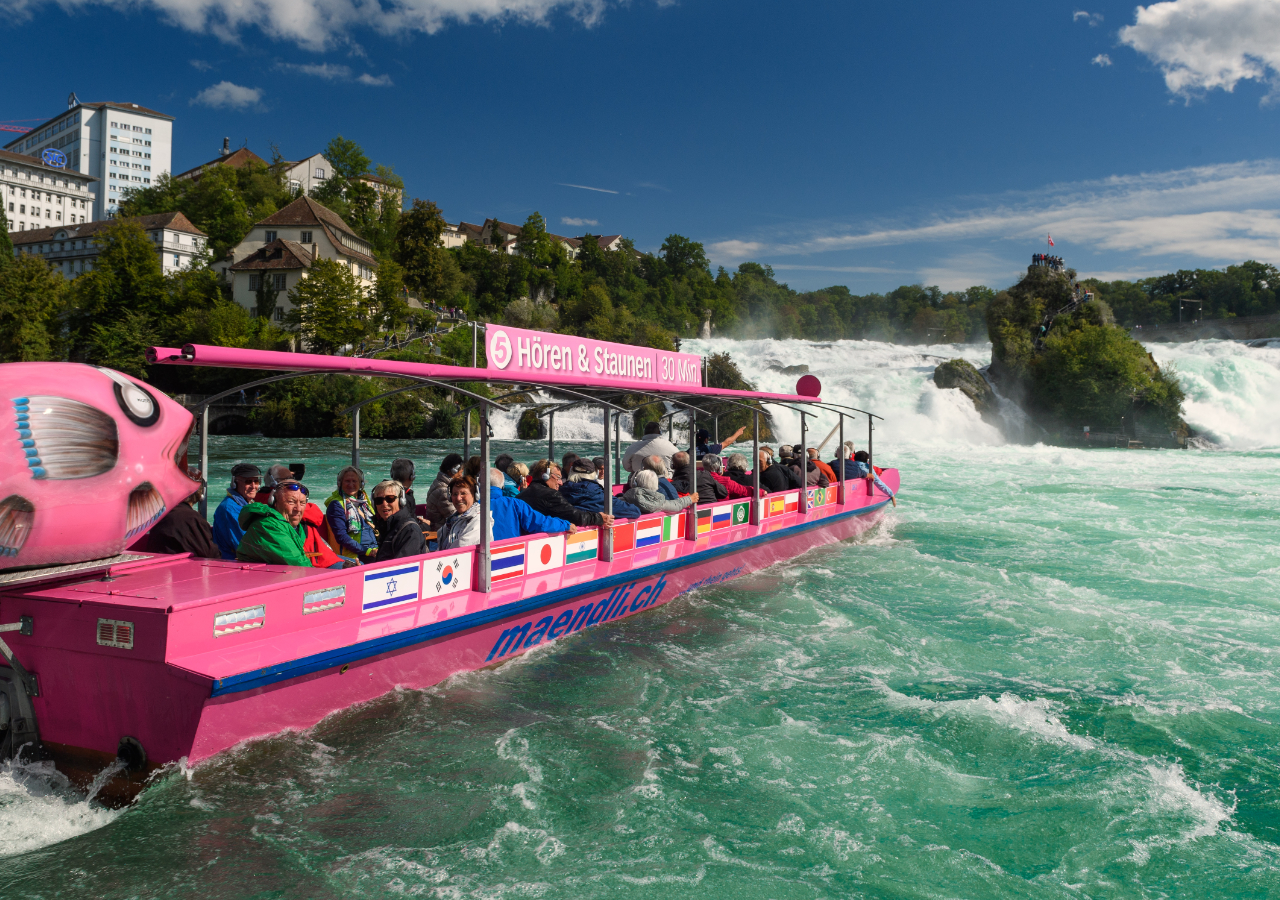 Get on board, put on your headphones and off you go. Let yourself be enchanted and learn about the exciting places and their history around the Rhine Falls – listen and be amazed!